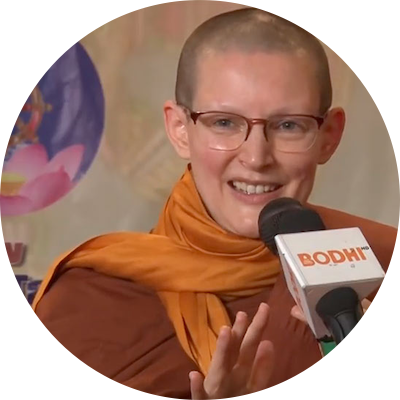 Venerable Bhikkhuni (Ayya) Tathālokā Mahātherī was born in Washington, DC in 1968 to environmentally-minded scientist parents. She followed her mother’s example by observing nature for answers and for peace, and her father’s example of inquiry through scientific research and investigation.

In 1988, at age nineteen, urgently inspired by the sudden death of an associate, she left her Pre-naturopathic Medical studies in university and made her way first to Europe and then on to India, entering monastic life as an anagarika and two years later undertaking ten-precept nuns' ordination as a novice. Wishing to connect with the ancient lineage of the Bhikkhuni Sangha, she sought and found her female mentor in Buddhist monastic life in South Korea, the most venerable bhikkhuni elder Myeong Seong Sunim (和法界 明星,), who gave her the name "Tathā-ālokā" (釋如光), under whose guidance she trained for ten years. Venerable Tathālokā Theri received the “going forth” (pabbajja, 出家) and took dependency (nissaya) with her bhikkhuni mentor (nissaya acariya 恩師) in 1993, and undertook the samaneri precepts (沙彌尼戒) with the late most venerable Mountain Forest Meditation Tradition bhikkhu masters Hye Am Sunim (慧菴堂 性觀大宗師) as Preceptor and Il Tah Sunim (日陀大師) as Acariya in 1995. Her grandmaster (bhikkhuni mentor's preceptor) was the late most venerable "Compassionate Cloud" Ja Un Sunim (慈雲堂盛祐大律師), the preeminent Vinaya master who reordained in Sri Lanka, before widely serving as preceptor for the revival of the Korean monastic Sangha in the 20th century.

Returning to the United States in early 1996, with her bhikkhuni mentor's blessings, in 1997 in Los Angeles, with an international gathering of bhikkhus, bhikkhunis, Dharma teachers and supporters in attendance, she received bhikkhuni upasampada from the Sri Lankan bhikkhu sangha led by her preceptor (upajjhaya), the late Chief Prelate of the Western Hemisphere, Most Venerable Dr. Havanpola Ratanasara Nayaka Mahathero. Since then Venerable Tathālokā has focused on meditation and on both the study and practice of Dhamma & Vinaya. Her meditation training in Theravada Buddhism has been largely with the masters of the Thai forest traditions stemming from Ven Ajahn Mun Buridatta: Luang Ta Maha Bua Nyanasampanno and teachers of the Ajahn Chah tradition, together with the Burmese mindfulness and insight masters of Sayadaw U Pandita's tradition and meditation master Pa-auk Sayadaw. Her Path practice has also been deeply inspired and greatly supported by the late most venerable Webu Sayadawgyi and the teachings of the most venerable Kathukurunde Nyanananda. The late Phra Mahaghosananda of Cambodia and the venerable Rashtrapal Thero of India have also been significant exemplars. Overall, her practice and teachings are profoundly influenced by the Buddha's own advice and injunctions as contained in the canonical Early Buddhist suttas.

Ven Tathālokā has conducted extensive research in Comparative Bhikkhuni Vinaya and World Bhikkhuni Sangha History, which were her dual focus in graduate school, contributing numerous articles on these subjects since, many of which are freely available on this dhammadharini.net site.

Recognizing the growing number of Theravadin bhikkhunis and samaneris in the United States and the true value of coming together in harmony, Ayya Tathālokā proposed and participated in the founding of the North American Bhikkhuni Association (NABA) in 2005. Several months later, she also participated in founding the first residential community for bhikkhunis in the United States named "Dhammadharini," together with the founding of the Dhammadharini Support Foundation. Not long after, she became a senior monastic advisor for the newly formed Alliance for Bhikkhunis, founded by Susan Pembroke. For her groundbreaking work, in 2006, Ven Tathālokā was awarded as an "Outstanding Woman in Buddhism" at the United Nations in Bangkok.

In 2007, she was invited by HH the Dalia Lama as a presenter to the First International Congress on Buddhist Women in Hamburg Germany, and participated in the First Bhikkhuni Patimokkha Recitation in North American, formally establishing the North American Theravada Bhikkhuni Sangha. Later in 2007, she co-led the Buddha Vision Bhikkhuni Training in Bodhgaya, India; also offering the keynote Dhamma Talk for the International Bhikkhuni Parisad in Aurangabad, Maharashtra, India for the former untouchable Buddhist community founded by Dr. Baba Saheb Ambedhkarji. In 2008, together with the assembled Bhikkhuni Sangha, Ven Tathālokā received the gift of the use of coastal redwood forested land for an off-the-grid women’s monastic hermitage, Aranya Bodhi, the Awakening Forest. Eight years later in 2016, Dhammadharini's founding vision for a "permanent" bhikkhuni monastery also began to come to fruition, with the Dhammadharini support foundation's acquiring of a property for that monastery at the western foot of Sonoma Mountain in Penngrove, which now has a Theravada bhikkhuni sangha in residence.

Venerable Tathālokā Mahātherī is the first Western woman to be appointed as a Theravada Bhikkhuni Preceptor (Pavattini-Upajjhaya), and she has contributed to the going forth and full ordination of more than 50 women as bhikkhunis in the USA, Australia, India, and Thailand. She began offering anagarika ordinations for women in 2005, Samaneri Pabbajja for women in Australia and the USA in 2008, and Bhikkhuni Upasampada in 2009/10. At the invitation of Venerable Ajahn Brahmavamso Maha Thero (Ajahn Brahm), she served as the Bhikkhuni Preceptor for the groundbreaking first Theravada Bhikkhuni Ordination in Australia at Bodhinyana Monastery in Perth in 2009, and the first Dual Theravada Bhikkhuni Ordination in North America in 2010 which was co-led by the most venerable Henepola Gunaratana Nayaka Thero (Bhante G). She has also served as the Bhikkhuni Preceptor for Samaneri Ordinations at Nirotharam Bhikkhuni Arama in Thailand, at the invitation of founder Phra Ajahn Nanthayani.

Ayya Tathālokā's advisory roles include as a Senior Monastic Advisor to the Dhammadharini Support Foundation, the Alliance for Bhikkhunis, Sakyadhita USA, the newly-registered NZ Bhikkhuni Sangha Trust, and the incipient Dhammakhema Trust of Sri Lanka.

Ven. Tathālokā has also been an active participant in Monastic Interreligious Dialogue, serving as a presenter for the Third Gethsemani Conference on "Monasticism and the Environment" and the subsequent Western Buddhist Monastic Conference on this theme, and is co-author of Green Monasticism. She is a founding participant in the San Francisco East Bay Area Tri-Cities Interfaith Council, and a co-founder of Interfaith Women of Peace, also in the San Francisco East Bay.

Ven Tathālokā Mahātherī's primary role is as the founding abbess and preceptor of both the Dhammadharini Monastery (Dhammadharini Sonomagiri Bhikkhuni Arama) at the western foot of Sonoma Mountain in Penngrove and the Aranya Bodhi Awakening Forest Hermitage on the Sonoma Coast in Northern California, where she provides Dhamma and meditation teaching and guidance and monastic mentorship in conjunction with vice-abbess and co-teacher Venerable Sobhana Theri and assisting teachers Ven Suvijjana Theri and Ven Ajahn Brahmavara Bhikkhuni. She also teaches regularly around the greater San Francisco Bay Area, in other states in the US, and internationally, most often in Australia, New Zealand, Sri Lanka, Thailand, and Canada. During the COVID years, she has begun to offer programs much more frequently online.

In addition to the founding of Dhammadharini Monastery (linked to at the top of this page), Ven Tathālokā's projects in recent years have included works in Buddhist Environmentalism and in "HerStory," bringing great awareness to the ancient great leading women in Buddhism, both bhikkhunīs and upāsikas. She's also furthered research into the ancient bhikkhuni monastery sites of Sri Lanka, and Bhikkhuni Vinaya studies for the Bhikkhuni Vibhanga Project.

In January of 2019 Ven Tathaloka Theri joined for the second great International Bhikkhuni Ordination in Bodhgaya (20 years after the first), in which bhikkhunī preceptors of Theravada traditions from around the world gathered. After the ordinations, during the Global Conference on “Buddhism and Women’s Liberation” hosted by the Mahabodhi Society of India in Bodhgaya, a World Theravada Bhikkhuni Council was proposed. Two years later in 2021, the United Theravada Bhikkhuni Sangha International (UTBSI) was inaugurated on the occasion of the 25th Anniversary of the revival of the Theravada Bhikkhuni Sangha in Sarnath, India. Currently, Ven Tathaloka Theri serves as the initial regional UTBSI coordinator for North America and Europe, and Bhikkhuni Sangha History/HerStory coordinator.

Restoring The Bhikkhuni Sangha For Our Times - Ayya Tathālokā

Welcome to Treasure Mountain, the podcast that inspires and guides people to find the the treasure within human experience. I’m your host Sol Hanna. In this episode of Spirit Stories we have as our returning guest, Ayya Tat…

On this episode of Spirit Stories we have as our guest, Ayya Tathālokā from Aranya Bodhi Awakening Forest Hermitage in California. Ayya Tathālokā was born in Washington, DC in 1968 to environmentally-minded scientist parents…