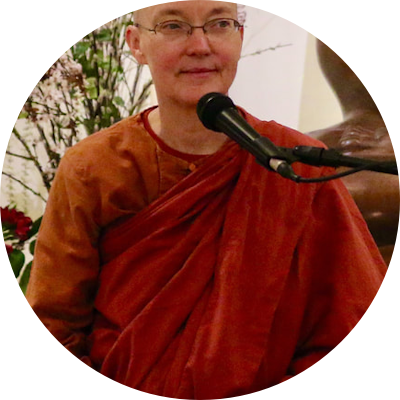 Ayya Santussika was born in Illinois in 1954 and grew up on a farm in Indiana. While being a single mother, she received BS and MS degrees in computer science. She worked as a software designer and developer for fifteen years in the San Francisco Bay Area. Her search for deeper meaning and ways to be of service led her to train as an interfaith minister in a four-year seminary program that culminated in a Masters of Divinity degree. She began traveling in Asia from 1999, learning from master teachers, particularly in Thailand. It was these experiences, along with time spent at Abhayagiri Buddhist Monastery in California that caused her faith to develop to the point of choosing to live and practice as a Theravadan nun.

Ayya Santussika entered monastic life as an anagarika (eight-precept nun) in 2005, then ordained as a samaneri (ten-precept nun) in 2010 and a bhikkhuni (311 rules) in 2012 at Dharma Vijaya Buddhist Vihara in Los Angeles. She has trained in large and small communities of nuns, including Amaravati and Chithurst monasteries of the Ajahn Chah tradition in England.

On this episode of Sage Advice we have as our return guest, Venerable Santussika, the abbott of Karuna Vihara in northern California to offer sage advice on what role, if any, does faith play in the Eightfold Path of Buddhis…

On this episode of Spirit Stories our guest is Ayya Santussika, the abbott of Karuna Buddhist Vihara in northern California. Ayya Santussika was born in Illinois in 1954 and grew up on a farm in Indiana. While being a singl…