Giving From The Heart - Bhikkhu Mettaji

On this episode of Sage Advice, Venerable Mettaji returns to offer his advice on the topic of giving from the heart.

On this episode of Sage Advice, Venerable Mettaji returns to offer his advice on the topic of giving from the heart.

Thank you for listening to the Treasure Mountain Podcast. If you enjoyed this episode please share it with you friends. If you'd like to support me to produce this type of content in future, you can support my work by offering a tip via the Ko-fi payment applet.

May you be happy!

sol_hanna In this episode of sage advice. We have Venerable Mettaji from Bodiana monastery calling in from Serpentine Western Australia here to share his advice on giving from the Heart. Welcome venerable. How are you this day.

mettaji Very well. Thanks Sol lovely to talk to you.

sol_hanna Thanks, Very much for coming in to share your experience and wisdom on this topic of generosity. Let's start with a simple direct question. Why give?

mettaji Why give fabulous question. Um I think giving now that I'm in my sit mid 60 s giving is probably the biggest joy in life. Um. In giving I can see what ajam Brahm and other teachers have found that there's this wonderful feeling of lovingkindness. You know if you give without conditions. Um the spirit of being involved in giving tends to circulate. Ah, you get good feelings back but it often puts you in the company of you know, really good people and if you give with good intention. Um, as the buddha intended you know, really good actions and karma can result.

sol_hanna That's fantastic answer. In fact, some ways I think you've answered my next question but I'm going to ask it anyway in Western culture. The idea of generosity is also venerated and considered highly. However, it often stems from this idea of sacrifice as In. I sacrifice myself and I suffer show that you may be happy but the buddhist perspective on giving and generosity. It's a bit different isn't it.

mettaji Yes, I mean um I had a fortunate childhood but I can remember some of the females in the family saying you know I sacrifice this for you, You need to get good grades at school. Or someone saying in a relationship you know I sacrifice this for you you you owe me and um, it's interesting in some of my recent you know readings that guilt and blame or you know even that I'd sort of say Whinging. Ah. About Sacrifice. It kind of misses out on some of the key aspects of the spirit of Humanity. Um I I something get you know I sometimes get get lost with this, especially if you kind of feel as though you're in a human relationship which. Very quickly seems to have a transactional ability to it. Um, it'd be great to develop a game that was I give and then you try and double my give. Um, sometimes you know you see that with some donations. But.

mettaji My my history on this is is only relatively recent because I think I only found the the real buddhist teachings in the last fifteen years but I would encourage people to kind of look at it not be sort of do good as um, in terms of you know I must give and then I'm going to get some reward. But. What does the nature of giving mean to them and is is it noble and is it full of meta.

sol_hanna Um, Ah, one of the things about giving is that it can be beneficial for both the recipient and for the person who's giving so from a buddhist perspective. What are the benefits of giving. But other benefits of generosity.

mettaji Um I didn't have a name for ordination 2 hours before my ordination I'd been given a different name by someone else. But um. With Banti Sujata who was visiting bodignana we went and had a look at the teraggata and we' were going up and down the series of lists and then we came to this name Metigy and I I always wanted metta ah in in my name and I said well what does metigy mean and he said victory through lovingkindness. And went that's it I don't need to look and any further if if I heard the word metigy a number of times a day that would remind me of an aspiration to live by so to me the um, the giving. Just kind of piles on um, the meta as long as you haven't made it sort of you know, really sticky. So a benefit of ah you've helped you've held somebody else they they may not know how to help themselves but by giving. Get them out of a troubling situation. You've got some wise advice to give them. You can show them how to make a cake you know with me the guys can show me how to lay bricks or or ah building alution block you know, whatever that is and just as you say when when the giving is very. Almost like pure and transparent. Um, then there's often a lot of fun and joy in that and you know friendships deep friendships can start from a good nature of of giving and. The best giving stories in your life are the ones probably you'll remember you know till your dying breath.

sol_hanna Wonderful! So venerable. We heard in your spirit story interview in the previous episode of Treasure mountain that you have put service to others as having a very important place in your life. What is it motivates you to give and what you. Personally get out of giving.

mettaji Just thinking in for a second. But um I think when you find the real teachings when you find a really good teacher that core message of the buddhas which is you know, understand suffering and the cessation of suffering. Um, suffering can be ameliorated by kind and generous service. So in my recent years I'd say there were items that popped up. Um. BsW a constitution um trying to come up with a humane response that we weren't happy with the religious discrimination bill if I if I could give from a position of. Had experience in that space. You know I dealt with government. Um I wasn't beholden to what I wrote I could write a draft and then said okay have somebody else you know improve it double on it that type of thing. So the giving in the action itself which. Is also something that the Buddha pointed at is if you were present in the moment and you didn't bring ego into the thing and you weren't looking for a specific outcome. Um, then that was probably the highest contribution that you could make on on the human plane. And I'm not trying to sorry exaggerate it or sort of um, build it up. But if you can be mindful enough as when you're doing one of those tasks you may pick up that and when it may not be going well for you, you could persevere with the the giving because your intention is very pure. Intention of course is very pure is important in developing good karma versus bad karma. How's this effect going to happen on other people so having the opportunity in monastic life to look at karma to look at giving to look at your intentions but that's a whole body of work. Which has been really beneficial to my life.

sol_hanna It sounds like you've anticipated my next question again. But I'm still going to ask it giving and generosity are often conceived of as external acts, but what kind of attitude or intention should we be cultivating on the insight to make maximum benefit.

sol_hanna From giving in terms of cultivating the mind.

mettaji Okay, um, some some people I've heard from very very recently I want to give you a good name in a moment that's influenced me in the last few weeks they would say that you can't really be a. Good service to the world unless you give generosity to yourself first and you know a lot of the meta meditations start by um, making sure you give meta to yourself when when I've taught meta meditations I ask people to. Ah, give lovingkindness to the whole of their body before we move to the mind imagine that they've got a light probe that goes into any cell into any atom and it's looking for points of tension and you look to release the tension in the body wherever it happens to be. And send you know lots of meta to that build up this ball of of heat inside yourself. Um, you know to to generate meta. So if you're not generous or or kind to yourself. Um, first. Things might get you know a little bit difficult but I'd say be generous and and kind to yourself first in all circumstances reminds me about a famous story about the Dalai Lama probably the the big story for me of the 1980 s he he used to do. An annual conference the mind body institute and they would take a week in um in dhamasile Dhammaala um going through a particular issue and they were discussing ah the mind. And he couldn't understand what the point of self criticism or self-blame was and it took 2 hours to translate the 1 word because there is no word. There is no concept in Tibetan buddhism tibetan culture. For that and ah he was asked to respond and the translator eventually said to him we don't call somebody an adult in the tibetan culture unless they love themselves. You've got to love yourself first and you know I think I think we've really. Ah, missed this? Um I heard a podcast yesterday a lady called Fern Cotton in the Uk interviewing um an expat Buddhist monk called natico and um natico kind of you know.

mettaji Reminded her that his observations of the west is we become more Divisive. We're more critical. Um, we don't necessarily kind of look out for each other and he said you know letting go is almost the simple gesture of just. Take the you know the type fist and just open it out offer the friend of the handship so you can either get tight on an issue or you can really you know, open up and say I don't know what's going to happen but the relationship and the kindness is more important to me. So. Sorry I've waffled on a little bit but generosity um to yourself first then often teaches you I Wonder how that will go with my partner I Wonder how that would go in the office. Um I Wonder if I want to start volunteering somewhere I know that um.

mettaji You know the town of lismore is kind of really struggling. So I remember if 5 or 6 of us could go there for a weekend and help people with the houses and stuff and it often only takes you a little bubble. Ah, you know a pebble thrown into a pond can make many many ripples very quickly. So kind of once you get it and understand what a beautiful um principle it is it tends to grow and grow and grow.

sol_hanna Beautiful answer starting with ourselves First of all and then like you say the stone throwing upon the ripple going out and out I think that's a a very nice analogy for how to um grow kindness in this world. It's wonderful, look da venible. It's. Been great having you on sage advice and really appreciate that you've taken the time to be with us. Thank you very much. 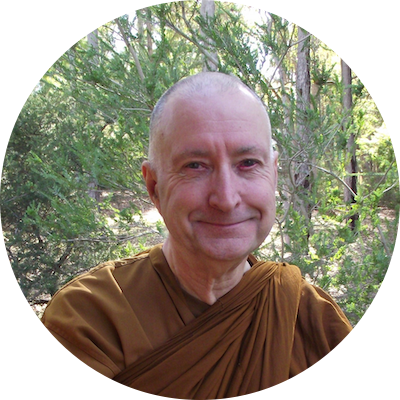